In 2015 the Club lectures and seminars were held in honor of Marie-Louise von Franz who was a Club member for many years and would have celebrated her hundredth birthday in the respective year.  How she met C.G. Jung is a quite particular story worth mentioning here.

Marie-Louise von Franz in her tower at Bollingen

It was in 1933. The messenger of fate was a nephew of Toni Wolff who then was the president of the Psychology Club. This nephew shared the class with Marie-Louise von Franz at high school. It is no exaggeration to say that without this seemingly chance concurrence, Jungian Psychology as well as the Psychology Club would certainly not be the same as what they are today. At that time C.G. Jung was eager to learn more about the younger generation, their reflections and thoughts. This is how it came that through the agency of Toni Wolff some young people were invited to visit that strange old man in the tower of Bollingen. Among them was Marie-Louise von Franz, the only girl. In the company of seven schoolmates from high school they took the train to Bollingen to visit the famous psychiatrist. Jung then was 58. To the young girl he appeared like a methuselah, the biblical archetypal father from immemorial times before the Deluge. The latter is said to have reached the biblical age of 969 years. It seems that the young people had spent the whole day with Jung until late in the evening. I really wonder how Jung was able to spend that much time with so many different people in addition to all his work.

For Marie-Louise von Franz this first encounter with Carl Gustav Jung was fated and it made an enormous impression on her. That very day a deep love for Jung and his psychology was sown in the depths of her psyche - a love that remained for the rest of her life. Many decades later, in an interview with Françoise Selhofer she recalled: “Jung spoke so impressively about the reality of the soul that I, who at that time had a rather rationalistic mind, soon did not know anymore whether I’m coming or going.” In the discussion at lunch C.G. Jung among other things mentioned a patient, who asserted that she has been on the moon where she had to fight a demon. So vividly was he talking as though this woman had really been on the moon. Marie-Louise von Franz, somehow irritated, objected that this young woman might have dreamed or fantasized that she was on the moon. Hereupon Jung looked at her very seriously and replied: “No, she was on the moon!” The 18-year-old, now really confused, thought: “Either this man is crazy, or I am too stupid to understand what he means.” When she went to bed after this long day being a bit tipsy as Jung served his young guests a lot of Burgundy wine she thought that most probably it will take her at least ten years to digest what this man had told her today. Later reflecting on this incident all of a sudden she realized that what happens psychically, is the true reality.

Soon after Marie-Louise von Franz attended the ETH-lectures of Jung for the first time. To her great surprise he remembered her and came straight towards her to greet her. Not much later she started analysis with him. Since she had no money she translated alchemical texts for Jung from Latin and later on also from Greek to German and thus “paying” her analyst.

1941 Marie-Louise von Franz was accepted to the Club as statutory guest and three years later she became a member of it. For many years she has been the librarian of the Club. She was very happy about this unique opportunity to read the respectively newest psychological and mythological literature as, at that time, she could not afford to buy these books for herself. However, she often complained, that the Club members do not make use of the library enough; a problem that still exists in these days.

More than eight decades later, in October 2015, some members of the Club visited the two towers of C.G. Jung and Marie-Louise von Franz at Bollingen, his round tower on the lakefront and her square tower farther up on the mountain ridge. We all listened to the stories of Jost Hoerni about his grandfather in the small garden in front of Jung’s tower. Years before Jung started to build the first tower in 1923, he rented an island on the Upper Lake Zurich for twenty francs a year. Together with his children and some students from the ETH Zurich he lived a wild and very “primitive” camp life on the island whenever time would allow him. Once, in 1921, sixteen members of the Psychology Club visited the island. This was, as we are told by the report of this excursion, the “Golden Age”, which probably does not so much refer to the Club, but rather to C.G. Jung’s exuberant and contagious joy of life in the midst of wild nature. 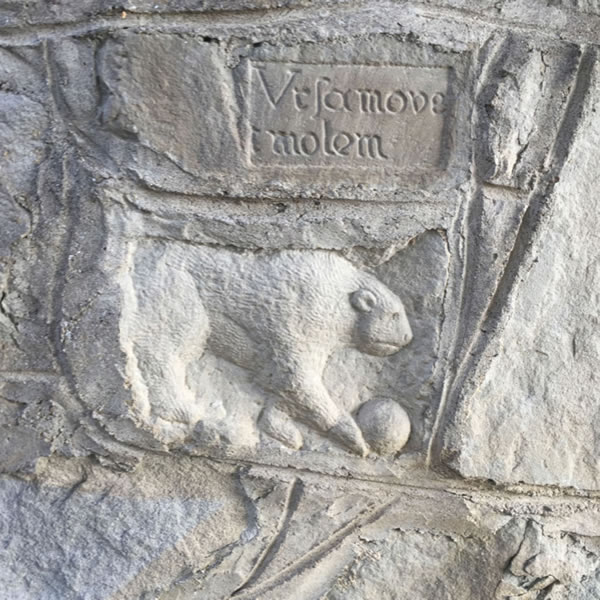 “Ursa movet molem” is chiseled on the exterior wall of the tower: “The female bear that is the constellation of the Great Bear moves the mass”. The Latin Moles means mass, power, also crowd. The Great Dipper seems to refer to humankind in general, if not to the whole cosmos, as this constellation belongs to the circumpolar stars which seen from the Earth turn around the polar star. The latter is the star to which already the Pyramids of ancient Egypt were directed. In the old kingdom the soul of the Pharaoh was considered to ascent towards the polar star, the dwelling place of the gods, in order to become one among them. Thus, as I believe, the inscription on the wall of the tower expresses what Jung once called “the eternal connection through fate” referring to those seemingly accidental incidences which Jung called synchronicities. More intuitively than consciously Marie-Louise von Franz recognized the eternal connection through fate, which she experienced already at the age of 18.

When we later visited her tower we once again witnessed the truth of Jung’s inscription “ursa movet molem” in a very impressive way. There we sat in the increasing twilight – we, that is some twenty Club members – in a circle around the table in front of the chimney listening to Gotthilf Isler’s account of his experiences with Marie-Louise von Franz. It was a true testimony of the same vivid spirit that awakened in Marie-Louise von Franz long ago in 1933 when she first met C.G. Jung. We all realized the mastership and deep love with which she passed on that spirit to future generations.

This is the goal of the Psychology Club Zurich to pass on to future generations that vivid spirit of Analytical Psychology in our time too. Now this is not only the contribution of those who actively present their view of Jungian psychology in a lecture or seminar, rather it is the task of all members and visitors to turn this place into a vivid and creative place by focusing on the manifestations of the objective psyche and listening to the messages of their soul. To give an inspiring lecture is one thing, but in order to succeed auditors are needed who listen with a sympathetic ear and an open heart. People who, each in their own individual way, follow the inner path as much as they can or, to express it in a more poetical language, who do not cease to long for that star at the starry sky which determines their individual and unique fate. However difficult this path may be, it will save us from many inconveniences. For he who goes his own way is fully occupied with himself. He cannot bother anymore about the shadow of his neighbor.